Lady Margaret Skiffington came to live in Innergellie at Kilrenny in 1970; she was previously living in the west of Scotland having been widowed in 1963.  We don't know the reasons for her move, however Lady Margaret was a keen collector of antique furniture, paintings and ceramics and presumably was looking for a suitable house in which to display and enjoy her collections, and Innergellie must have met her needs.

Lady Margaret died in January 2004, leaving her estate for the benefit of the blind and partially sighted in North-East Fife - she herself had lost her sight in later years – with the Lady Margaret Skiffington Trust having been established with the objectives of improving the quality of life for blind and partially-sighted people through provision of aids to support daily life, training and rehabilitation, and for provision of indoor and outdoor spaces offering a sensory experience, for example scented gardens and sensory rooms.

“I am happy to say that Zimeng Chen has made good progress this past year (with piano lessons).  She is playing Grade 5 scales and arpeggios and learning much more musical theory.  When Zimeng learns Braille Music, it will free her to read music for herself, and perhaps eventually, years hence, to teach piano if she wishes.”

A further provision was the preservation of woodland on Innergellie Estate for enjoyment by the community, with specific provision for blind and partially sighted people.  The Lady Margaret Skiffington Trust works to meet those objectives through financially supporting applications from eligible individuals and organisations.

Lady Margaret died in 2004, aged 93.  Her trustees sold the house and policies in 2005, retaining the woodland to the north, the money raised providing the capital through which the Trust generates its available funds. 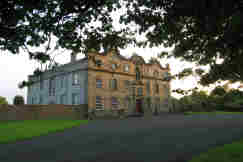 Innergellie is a Grade A listed mansion house.   The first recorded ownership of Innergellie was when a grant by King David I to the then Archdeacon of St Andrews was confirmed on 8th April 1153.    At one point in the fourteenth century it was part of the dowry  of  Annabella Drummond, wife of King Robert III.  In the mid-15th Century, Innergellie was granted to Archbishop James Kennedy, founder of St Salvator’s College, University of St Andrews. The estate remained associated with the archdiocese and the University until the Reformation.

In 1481 the estate was rented to John Lumisdaine of Ardaray, thus beginning an association with the Lumisdaine (Lumsden) family  which was to last for almost half a millennium.

In 1610, Innergellie was purchased by the Earl of Mar.  It was soon after conveyed to William Barclay, who received a charter dated 4th December 1623 from Charles I constituting Innergellie as a Barony. He married Margaret Borthwick in 1619.

In 1642, Sir James Lumsden (spelling was pretty inconsistent in the old days)  purchased the property that his family had tenanted for 150 years.  He had achieved renown in the service of  Gustavus Adolphus, King of Sweden at the head of unit of Scots troops  which  took part in the capture of Frankfurt and Leipzig during the Thirty Years’ War.  The wealth collected - doubtless as the spoils of war - enabled the then Colonel James to return to Scotland a rich man.   In 1644 he fought for Charles I at Marston Moor.   The family also fought in the last - and, in casualties, costliest - Anglo-Scots war, the Cromwellian invasion of 1650-51. Defeated at Dunbar by Cromwell in 1650, Sir James retired to Innergellie, perhaps spared by Cromwell because he had fought for the Protestant cause in Europe.   His brother Sir Robert fared less well. As governor of Dundee in 1651,  he was shamefully killed on its surrender to General Monck.

It is believed to have been Sir Robert’s grandson who was responsible for the building in 1740 of the present frontage.   The present house retains elements, possibly from the fifteenth and sixteenth centuries, of an older tower house, such as the tower itself (later topped in Venetian style), the cellars and the stone spiral staircase designed to enable a right-handed owner to wield his sword while advancing or retiring.   Note also the heraldic panel of 1650 above the entrance.   The Royal Commission of the Ancient and Historical Monuments of Scotland during 2004 recorded the house’s features in detail..

When William Lumsdaine, an officer in the East India Company, died unmarried in 1830, the barony and estate passed to his sister Mary Lillias Lumsdaine (1785-1864), who in 1816 had married Rev. Edwin Sandys, a scion of the ancient family of Sandys of Cumberland and descendant of Queen Elizabeth’s  Archbishop of York of the same name, not to mention three Tudor Kings of England.    He assumed the name of Sandys-Lumsdaine.  Part of the land, including the barony, were split off from the mansion house in 1923.

In 1970 the Sandys-Lumsdaine family sold the house with the remaining land to Lady Skiffington.    Lady Skiffington, who collected antique furniture, painting and ceramics suitable for a house of this vintage,  died  in 2004, aged 93.  Her trustees sold the house and policies in 2005, retaining the woodland to the north.